VICTORIA, TEXAS—The most recognized 1-Mile Top Speed Racing event in the world, The Texas Mile announced Tuesday morning it will establish its new home at Victoria Regional Airport in Victoria, Texas. The Texas Mile hosts over 220 of the fastest performance cars and motorcycles from across the United States to test their fastest speed in a 1 mile stretch. The bi-annual event will take place every March and October with the first event scheduled for March 24-26, 2017.

The Texas Mile welcomes amateur and professional car and motorcycle racers who all share the need for speed- without the fear of tickets or jail time! The Texas Mile was started in October 2003 by Julius (Jay) Matus, II and his wife, Shannon Matus, in Goliad, Texas with 35 participants and relatively no spectators. Over the last 14 years, the event now features over 220 participants and thousands of spectators in attendance. In recent years, the event has taken place at Chase Field Industrial Complex in Beeville, Texas and has brought over $1 million dollars to the local community each year with over 2,700 hotel room nights booked.

“We considered Victoria as the possible new site for The Texas Mile for several years,” said Jay Matus, CEO of The Texas Mile. “With a lot of hotel options and great family tourist attractions for our spectators, we think the time is perfect to move The Texas Mile here permanently,” he added.

“Victoria is very pleased to have such a well-known event like The Texas Mile move here, “said Joel Novosad, Director of the Victoria Convention & Visitors Bureau. “The event will bring hundreds of overnight visitors to Victoria and have significant economic impact for the community.”

For Participants and spectators, convenient amenities will be offered onsite such as local food trucks, merchandise, and shaded spectator viewing areas. Hotels, motels, RV parks, and quaint B&B’s around the Victoria area are excited to welcome racers and fans to make Victoria a comfortable home away from home for the extended weekend.

BLYTHEVILLE, AR— Fulfill the need for speed this June 3-5, 2016 at the Arkansas Aeroplex in Blytheville, Arkansas as gear heads, car enthusiasts and spectators will gather to witness some of the fastest cars and motorcycles in the world race full throttle down the 1-mile stretch of concrete. All with one question in mind—Who will earn the prestigious title of setting the 1-mile top-speed record at the inaugural event? Behind the “No Speed Limit” event coming to Blytheville is the team from most well- known 1-mile racing event in the world, The Texas Mile and their sister company, The U.S. Mile.

The Arkansas Mile welcomes street legal street sport cars, motorcycles, trucks and concept race cars. It features everyday people as amateur participants, novices, and professional racers alike who all share the need for speed- without the fear of tickets or jail time!

The concept is simple: drivers line up and go as fast as possible for one mile. The goal? To set the fastest MPH record at the event, be the fastest car, truck or motorcycle in your vehicle’s class or just achieve a personal best.

In attendance will be The Texas Mile Top Speed Record Holder, a modified 2006 Ford GT by M2K Motorsports out of Houston, TX. In April, the undisputed “King of Speed” ran 279.9 MPH breaking their own previous record of 278 MPH at the 1-mile mark. With a new event and new record to be set, M2K plans to continue their reign and set the top speed at The Arkansas Mile.

Check out the Arkansas Mile to get a true VIP motorsports experience where you can hang out with the participants, get under the hoods of some of the fastest cars and motorcycles from across the world and enjoy a front row seat along The U.S. Mile’s newest 1-mile track.

The Arkansas Mile will be teaming up with the other motorsports festivities happening the weekend of June 3-5, 2016 at the Arkansas Aeroplex; including the Cars and Cycles Against Cancer fundraiser, the British National Meet and welcoming television host, Dennis Gage of “My Classic Car” to Blytheville for an explosive motorsports weekend. Alongside The Arkansas Mile, spectators will also get full access to the FPV Experience- top speed drone racing happening onsite.

Don’t miss out on your chance to challenge the new Arkansas Mile in your own vehicle and see some of the fastest vehicles in the world achieve their top speed in 1-Mile. For more information, please visit www.arkansasmile.com.

As The U.S. Mile wraps up 2015, we want to thank everyone- sponsors, participants, spectators, staff, and vendors who made the first Colorado Mile a success. For event results, please click here.

In October, we celebrated the 13th anniversary of The Texas Mile in Beeville, Texas with a perfect storm. The weekend event acquired the nickname “The Monsoon Mile”. Although the event faced an upheaval of storms over the weekend, we conducted the FIRST EVER 1-mile night runs to extend dry track time for participants. For event results, please click here.

The U.S. Mile is looking forward to a great year in 2016 with the addition of The Arkansas Mile with its home in Blytheville, Arkansas! More announcements regarding event dates, registration, participant information, etc. coming soon.

PEARLAND, TX– The U.S. Mile, the team behind infamous 1-Mile land speed racing events, such as The Texas Mile and The Colorado Mile, announced its second expansion and third 1-mile racing event, The Arkansas Mile. The Arkansas Mile will attract gear heads, car enthusiasts and spectators alike to gather at the Arkansas International Airport in Blytheville, Arkansas next summer on June 3-5, 2016. The event will bring the same “heart and soul” to racers in the Arkansas Delta as it has to South Texas over the last 13 years.

“Blytheville is less than a one-day drive from 50 percent of the population of the United States,” stated Barrett Harrison, President of the Arkansas Aeroplex. With an ideal location, The Arkansas Mile will welcome drivers of street legal cars, motorcycles, trucks, and concept race cars to test their top speeds on a 1-mile stretch of concrete.

The concept is simple: drivers line up and go as fast as possible for one mile. The goal is to set the fastest MPH record at the event, be the fastest car, truck or motorcycle in your vehicle’s class or just to achieve a personal best speed record.

Liz Smith with the Blytheville Area Chamber of Commerce said, “We are thrilled to host the First ‘Arkansas Mile’ in Blytheville. Our entire business community looks forward to rolling out the red carpet to drivers and visitors alike, and no red carpet can match an Arkansas Delta red carpet!” The Texas Mile located in Beeville, Texas is known to boost the local economy over event weekends, bringing in thousands of people from across the U.S., Canada, and other countries.

The Arkansas Mile will be teaming up with the other motorsports festivities happening the weekend of June 3-5, 2016 at the Arkansas Aeroplex; including the Cars and Cycles Against Cancer fundraiser, British National Meet and welcoming television host, Dennis Gage of “My Classic Car” to Blytheville. Throughout the weekend, spectators will witness racers going full throttle, see performance vehicles up close and personal and celebrate the lives of friends and loved ones fighting or have fought cancer.

Don’t miss out on your chance to challenge the new Arkansas Mile in your own vehicle and see some of the fastest vehicles in the world achieve their top speed in 1-Mile. For more information, please visit www.theusmileracing.com. 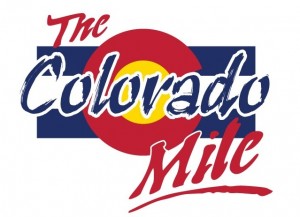 Registration for The Colorado Mile is

Don’t miss out on the 2015 Colorado Mile Inaugural Event!

The story of a record-shattering, all-electric ’68 Mustang

The world’s most expensive supercars can hit 60 miles per hour in less than three seconds. The fastest production car in the world, the Hennessey Venom GT, does it in 2.7; Lamborghini’s 602-horsepower V-10-powered Huracán has been unofficially clocked at 2.5. If you were sitting in a Huracán right now, you could go from zero to 60 in less time than it takes to read this sentence. But somewhere in a Texas garage sits a strange car that’s even quicker: a 1968 Mustang fastback known as the Zombie 222, and it’s entirely electric.

Watch How This Team Got A Ford GT To Do 278 MPH At The Texas Mile. Here’s what the proud owner had to say about it:

“The Ford GT was built and tuned by M2K Motorsports out of Fulshear, Texas. This is the same car that held the previous record at the Texas Mile at speeds of 257.7mph, 263.3mph and 267.6mph.

The M2K Motorsports GT reached 278 mph over one mile from a standing start, making it the fastest vehicle ever to run at the biannual Texas speed fest.

Houston serves up nationally recognized dining, shopping, entertainment and nightlife. We have world-class attractions and events. Best of all, you’ll find a number of things that are budget-friendly or free. In fact, there’s so many things to do in Houston, you may want to schedule an extra day or two to your trip!