The M2K Motorsports GT reached 278 mph over one mile from a standing start, making it the fastest vehicle ever to run at the biannual Texas speed fest. 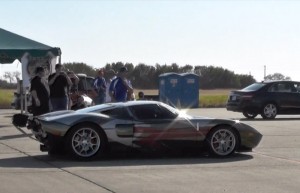 The previous record of 267.6 mph was set by the same car in the hands of Hennessey Performance. Prior to that, Hennessey set records of 263.3 mph and 257.7 mph with the car.

How does this Ford GT do it?

While the Hennessey/M2K GT is street legal, it’s powered by a purpose-built twin-turbocharged Accufab Racing V-8.

Evo reports that the GT was putting out around 2,000 horsepower during its record run, compared to 500 hp for a stock GT.

The Texas Mile is the perfect place to unleash it. The event is held on an airport runway in Beeville, Texas purely to allow drivers of souped-up cars like the GT–or a twin-turbocharged Lamborghini Gallardo–to see what their machines can do.

While outrunning a Bugatti Veyron is safer on a closed airstrip, there’s still a bit of danger. Abrupt cross winds can make cars much harder to control at speed.

However, the M2K GT isn’t the fastest car over a standing mile, or even the fastest Ford GT. Both of those distinctions go to the Performance Power Racing Ford GT, which hit 283 mph in 2012, as certified by Guinness.